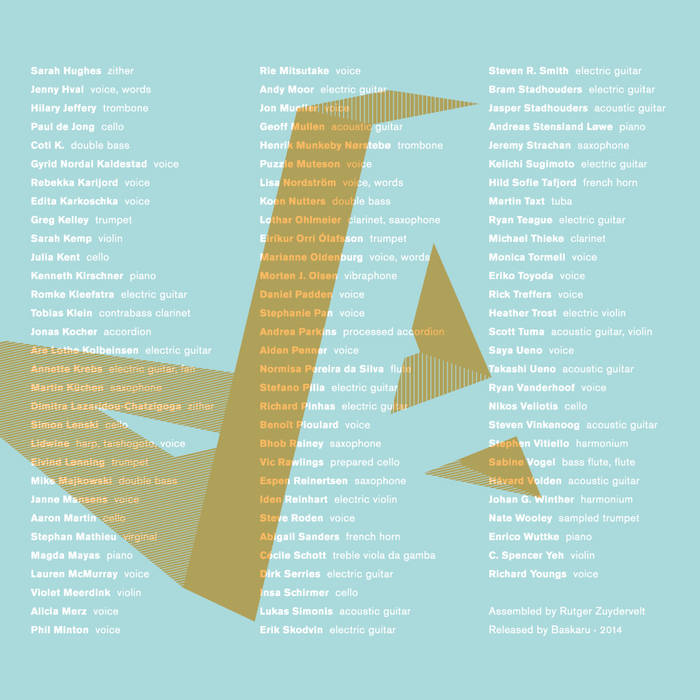 A walk through the orchestra. That’s exactly what Rutger Zuydervelt invites us to do: to take a walk through the orchestra. Stay Tuned started as an installation where each speaker plays a continuous loop of a group of instruments playing an A note, as if they were tuning up. Visitors walk freely in this environment, literally walking through the orchestra; each step they take changes the mix of what they hear. In the summer/fall of 2013, this installation was presented indoors at Sounds Like Audio Art in Saskatoon (Canada) and in an outdoor setting at Into the Great Wide Open in Vlieland (The Netherlands).

For the CD version released by Baskaru, Zuydervelt produced a 50-minute mix that slowly takes us from section to section of his 153-piece ensemble – a who’s who of the global avant-garde music scene, with names ranging from Oren Ambarchi to Richard Youngs, by way of John Butcher and Nate Wooley. There’s the expected orchestra instruments (woodwinds, strings, brass, tuned percussion), and also, electric guitars, piano, and voices. The result is a drone in A that develops impressive levels of richness, depth, and movement. It feels like this orchestra will never stop tuning up, and you won’t want it to.

Dutch electronicist and conceptual artist Rutger Zuydervelt is best known for the experimental ambient/electro-acoustic music he has been releasing since 2004 as Machinefabriek. Under that name he has garnered critical acclaim for albums released on labels such as Type, Important, 12K, Dekorder, and Experimedia, and collaborations with Steinbrüchel, Jaap Blonk, Peter Broderick, and Steve Roden, among others.