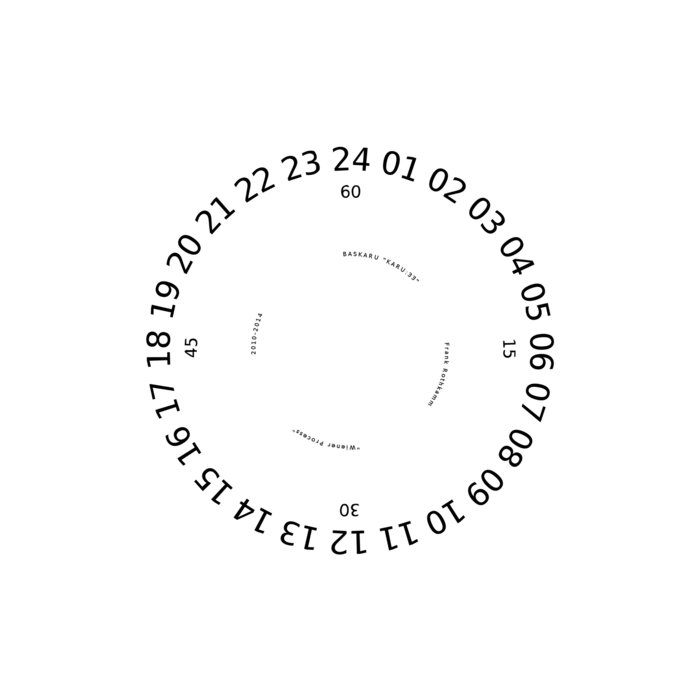 Electronic composer and musician, philosopher and conceptual artist Frank Rothkamm doesn't do anything halfway. In 2010, Frank was diagnosed with tinnitus, a brain processing disorder that greatly disturbed his sleep. So he started to research a sound treatment that would "mask" or eliminate the high frequencies he was doomed to hear for the rest of his life.

After 4 years of experimentation Frank failed to find a cure for tinnitus, but discovered what he proposes as the "scientific method of psychostochastics" and a new conception of music: Music that has no time. Statistically designed - so that listeners will not remember what was heard a few minutes ago and what they hear will be different upon each encounter - they enter into what he postulates as a "zone where there is no beginning nor end, no linear development but the laws of quantum mechanics". To gain a new understanding of our perception of sound, time and uncertainty, he calls this the Wiener Process; as a nod to the mathematician and philosopher Norbert Wiener.

Seeded from a single algorithm, the Wiener Process unfolds in 24 distinct 1 hour "zones" or pieces. Each is nothing but a drawn-out instant of time, an ultra magnified moment of Planck time. There are 24 of these, because there are 24 hours in the day, so the Wiener Process, "once set in motion in the listener, will go on until the listener dies", as Frank claims. All the pieces of the Wiener Process are through-composed Csound scores and were coded over the course of 4 years in 3 computer languages: Forth, Coldfusion and Python. Frank specifically designed a "Studio B" which is very small, has no windows and consists of a library of historic books on computer science and vintage IBM and SUN machines running a "supermodern" command-line-only Linux Operation System. All pieces were written in this studio located at the Lodge For Utopian Science in View Park, California, with the exception of one: "Rnd9c4-2_Grand_Canyon opus 490" was composed at the Maswik Lodge in Grand Canyon Village, Arizona.

With all these constraints in place Frank created a singular, sprawling work that transcends its preconditions. This is music without roots, although it shares affinities with the works of certain computer music and generative music pioneers.

"The Wiener Process draws heavily on the uniform random distribution and borrows notions from quantum mechanics and psychoacoustics", Frank acknowledges "I simply used the Scottish philosopher David Hume's skepticism on causality as a starting point and ended up with the Austrian physicist and philosopher Ludwig Boltzmann's hypothesized self aware entity."

Yes, simple as that, each piece is a slice of infinity, without beginning, development, or end. However, the 24-hour sequence follows a clearly-drawn listening curve that starts with silence (honestly, "Pink0 (Urgestalt) opus 76" will amount to literally nothing for some listeners as its frequency content is all above 10,000Hz), goes through stages of white noise and pink noise, then crosses a tonal zone of increasingly-active stochastic melodies. By then, we are halfway through the set. Then, melodic activity loses momentum, and the music gradually enters denser harmonic planes - "rnd9e_Million opus 499" passes by at the average rate of 277 events per second(!) - goes back to undifferentiated sounds, until the 24th hour, which consists of a delicate field recording piece entitled "Hyperacusis Man opus 82".

This unique project is designed for low-volume headphone listening, can co-exist with any other music or sound environment or simply function as an auditory 24 hour clock. "The effect of psychostochastics is synaesthetic and not dependent on the volume for the listeners nor their attention" Frank promises.

Baskaru releases Frank Rothkamm's Wiener Process as a datastream, download and as a set of 24 CDs housed in a hand-made Lucite double box. The 24 CD box set edition is limited to 24 box sets. On each CD of the box set a 24 hour clock is printed with each CD having one different number missing, the absence indicates which hour it represents.